Quite often, you'll find you can manufacture your own solution if you just keep trying.

I had finally gotten around to starting a small woodworking project I had put on hold for a long time. It was a relief to actually get some traction on it.

Then the table saw quit working. Sigh. You've got to be kidding.

After a period of troubleshooting, it became apparent this little guy was the culprit. 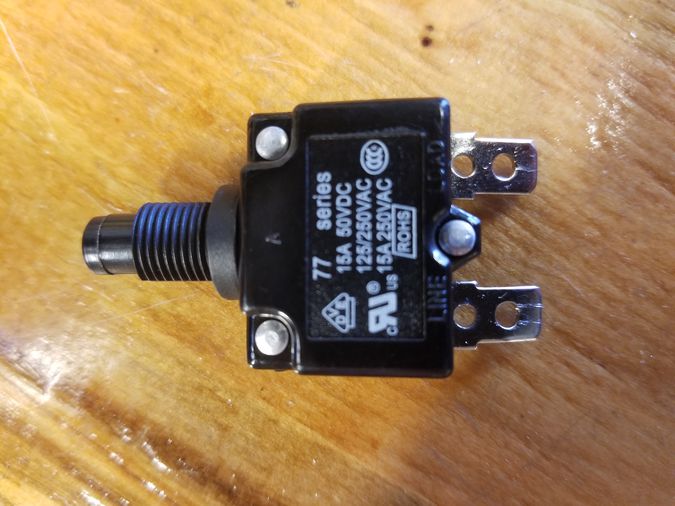 I had seen these hanging on a hook at my local hardware store, so I jumped on the bike and rode down there expecting to be home in short order. It was not to be.

They had no 15A versions, but had plenty of 20A versions of it, probably because everyone needs 15A breakers, but hardly anyone uses the 20A ones. I moved on.

I rode down to Tractor Supply. They didn't have anything like it.

I rode down to Lowes. They didn't have them either. The guy in the electrical department suggested Batteries+ or waiting until Monday for the electric supply house to open. Waiting is not part of my plan.

On my way back down the aisle, I spied an in-line fuse holder that came with one fuse. I struggled to read the markings on the fuse, and finally saw it was 20A. Crap. I stood there a while debating whether to gamble on having a 15A fuse like this at home, and finally gave in and bought the fuse holder.

I had now burned up nearly two hours since the saw quit working. It was not a happy time.

When I got back to the shop, I pulled out my collection of crimp-on spades and discovered I only had one male spade, and it was actually too big for this wire. Crap! I really didn't want to make ANOTHER trip to town just for this!

I kept digging in my parts until I located some male spades made for soldering to PCB's. I stood there, staring at them. How can I make these work? What would it take?

My eye roamed around the shop. My gaze stopped on a collection of solid copper wire left-overs. There, gleaming in the bright white LED light in my shop was a bare naked length of AWG-14 solid copper. Hmmmm. Yeah, I think this is it.

I pounded the copper flat, made a clasp, captured the spade legs and the wire in the clasp, soldered and shrinked (is that a word? Yeah, it is.) it and I was in business.

So, my field tip today is, Never Give Up. Keep pushing until you have exhausted every possibility. Of course there will be times you simply can't do what you want to do, but if you give up prematurely, you have already determined your fate.

Persistence and faith in yourself to work out your problems are a couple of Things That Work!