Eight Raspberry Pi's and two desktop computers, what is now called PiNet started six years ago as a simple wish to know whether the garage door was open or closed. 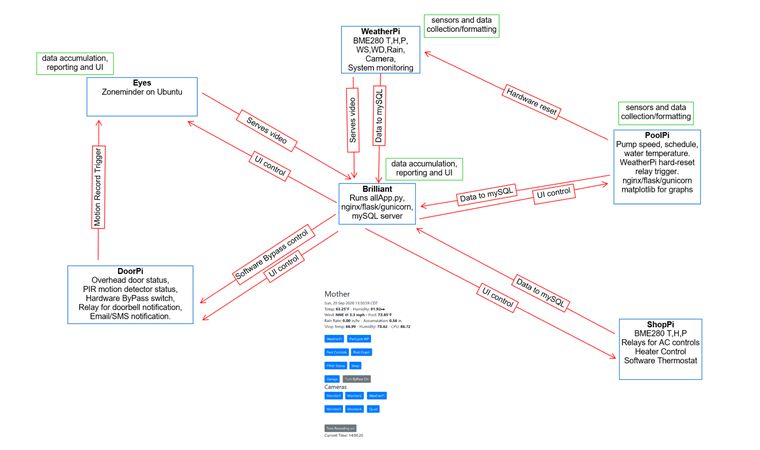 It started in 2015 with my wish to know whether my garage door was open or closed. I had a Raspberry Pi that wasn't doing anything, and so I wrote my first Python program, and ohd was born.

Then we got an in-ground pool in the backyard. The commercial controller was abominable, so I picked up another Raspberry Pi, a relay board, and wrote my second Python application, poolApp.py.

then the Weather Station

When I dumped the second Accurite weather station into the trash in only two years, I started my quest for a Reliable, Robust, Repairable Raspberry Pi-based Weather Station. The station lives outside on a pole, but I wanted the database protected in the house.

I had a little i3 Lenovo computer that really wasn't doing anything, so I thought it made sense to put it to work holding a mySQL database for the weather station. So I stuck a 4TB hard drive in it that I pulled out of a WD MyBook external and put it to work.

then the web-based UI

Not much later I realized I needed a single interface for all this stuff, and allApp.py was born. It runs on Brilliant, the little i3 Lenovo.

and then Eyes (cameras)

Prior to 2022, Zoneminder was my DVR software. Now Agent DVR runs headless on Ubuntu on a fairly hairy gaming computer bought on sale from Best Buy (this one I didn't build myself). I have four 4K TCP/IP cameras and the Raspberry Pi Camera in WeatherPi feeding into it. Our interface to that system is part of the allApp.py running on that cutesy little i3 Lenovo.

and then the shop

I built myself a pretty nice shop in the back yard. It has A/C for the summer, and heat in the winter. I hated the GE cloud-based App controls for the window unit, so I ripped out the controls electronics and built my own out of, you guessed it, another Pi and relay board. ShopPi was born.

Discovering the joy of the 2004 LCD module caused the addition of PlayerPi, PiddlePi and PoohPi to the mix. To be technically accurate, PlayerPi already existed, but didn't have the LCD. At any rate, now there are three, all displaying whatever I want. It's very fun.

That pretty well describes in a concise manner the PiNet as it exists today. More to come.